Posted by lifeaswewearit on July 30, 2013 in Daily Style | Leave a comment

I’m on 5 and a half week countdown till I leave for New York.

I’ve never been before, so to say I’m excited is about as understated as Phoebe Philo’s wardrobe.

And mentioning wardrobes, I’ve been trawling for outfit inspiration so my daily segue from shopping to glamorous lunch to afternoon cocktails to evening dinner looks as much like an episode of ‘Sex and The City’ as my inferior budget, looks and figure allow.

Here’s a few looks I’m working with at the moment. 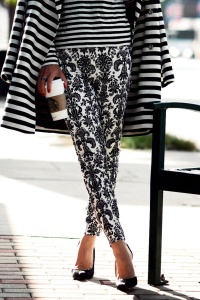 I’ve got some great black and white silk printed pants by We are Handsome and I think the stripe and pattern looks great like this.   The scarf with the top would look great with a pair of khaki pants and skater shoes or Birks or Converse – I’ll probably take all three.  These pants also look good with a short length leather top as they are high waisted so that’s two or three outfits.

I’ll be taking a few shirts so I’ll also pack my new Alexander Wang white, bandage wrap skirt (on sale, Net-a-Porter) and this will make a good day and night outfit.

I’m probably going to double-denim this look, but I’ve dug out my flares and thinking they make more of an outfit than my skinnies (which I will take, of course, but think of more in terms of day and flats that something more glam).  The flares really need a heel and I rarely get a chance to wear one in my everyday life.

Now these are two failsafe outfits that will have to be incorporated.  The look on the right will allow me to pack my Chanel jacket and wear just like this, with boyfriend jeans and heels for a lunch.  I’m hoping by the time this jacket is bequeathed to my daughters its personal cost per wear has come down to something less taunting than it is now (who’d have thought it would be so hard to wear Chanel).  My trusty D&G cream silk with black lapel jacket can now be packed to pull off the look on the left and inevitably, be useful on many other looks when it gets a bit chilly.

And last for now, I have this in mind for my Clover Canyon pants I bought/wore/blogged in Hawaii.  They are actually very colourful, but the outline of this look fits my idea.

The only problem is, 30kg baggage allowance.  Clearly the person who came up with that number doesn’t like clothes.

(p.s. not photos are mine, see frenchvoguettes, theyallhateus, whowhatwear for most)